The pictures from India are horrific. India is experiencing an enormous surge in covid-19 cases. The number of new cases per day are in the tens of thousands. Every day thousands of deaths are added – and that's probably an underestimation. Hospitals are overwhelmed. Nurses tired. There is a lack of oxygen and hospital beds in some part of the country. And lockdowns are hitting hard the poorest of the poor.

India made errors. The government opened the economy too quickly and non-essential activities and big gatherings were made possible. Leadership is missing, too. Moreover not all people comply with social distancing or masking. Isolation is difficult in overcrowded districts, and not everyone takes the disease as serious as it should be. The vaccination drive is slow.

But it would be too easy to dismiss the drama as India's own fault. There's a bigger picture. The world is an unequal place.

Countries are hoarding vaccines and holding back the raw materials of vaccine production. The American ban on the export of raw materials proved to be problematic for the Indian vaccine producers. The United States says it's Trumps fault, but the new president Joe Biden likes his 'America First'-strategy as much.

Patents too are slowing down the production. Those patents seem to be inexpugnable. Some say that scrapping the patents for covid-19 vaccines and medicines will undercut all patents. It seems they have little faith in the robustness of their glorified system...

Celebrated scientists, old heads of states and the World Health Organization are asking to lift the patents on vaccines. Medical companies are claiming that they could have already been producing vaccines or other medicines if they were involved in the production earlier.

A Canadian company said it could help, but it is not allowed to. “If we had started this last year, we could have shipped millions of doses by now. This is supposed to be like a wartime effort, everyone in it together. But that doesn’t seem to be the case”, says John Fulton, the vice-president of Biolyse in The Guardian. Opening extra production capacity seems too hard. And when companies and industries are willing to help, there are send away.

The Western initiative Covax isn't working at all. Only a fifth of the promised doses have been delivered. Million of doses are outstanding, but before those reach the developing and emerging countries thousands extra will die. Covax is sustaining a deadly monopoly of a handful vaccine makers. Thank you Bill Gates!

Some say 'the market' has failed us, but that is not entirely true. The product has been mainly sponsored by some governments and the formula and production was given to a handful of companies. The patents made sure that the market cannot work. Nothing is open. It's a closed circuit. Vaccine makers are getting rich, and Western governments are cheerleading them.

The rest of the world is the plaything of the 'vaccine diplomacy' mastered by China, India and Russia, and clumsy copied by the United States, United Kingdom and the European Union.

I think so. More than a year ago, we read about production challenges like the lack of vials or a scarcity in raw materials. Debates on the necessity of patents were opened. Foreshadows of production shortages were explained by experts. Today, the fear came true. I can't remember politicians cut a ribbon of new production facility...

What is sure, is that the West is not the one who will be duped by this whole corona crisis. The Western economies are being doped as never before. Billions of dollars are invested. The 'free' money is making sure the West will survive the hiccup without too much damage. Before summer ends in the northern hemisphere most Westerners will have gotten their corona vaccine jab, and the pandemic will be quickly forgotten...

But developing nations and emerging countries won't be able to cope that easily and that quickly. Will they remember that at the start of the pandemic the world wanted to ensure that covid-19 drugs and vaccines would be universally and cheaply available? And that Western values decided otherwise? 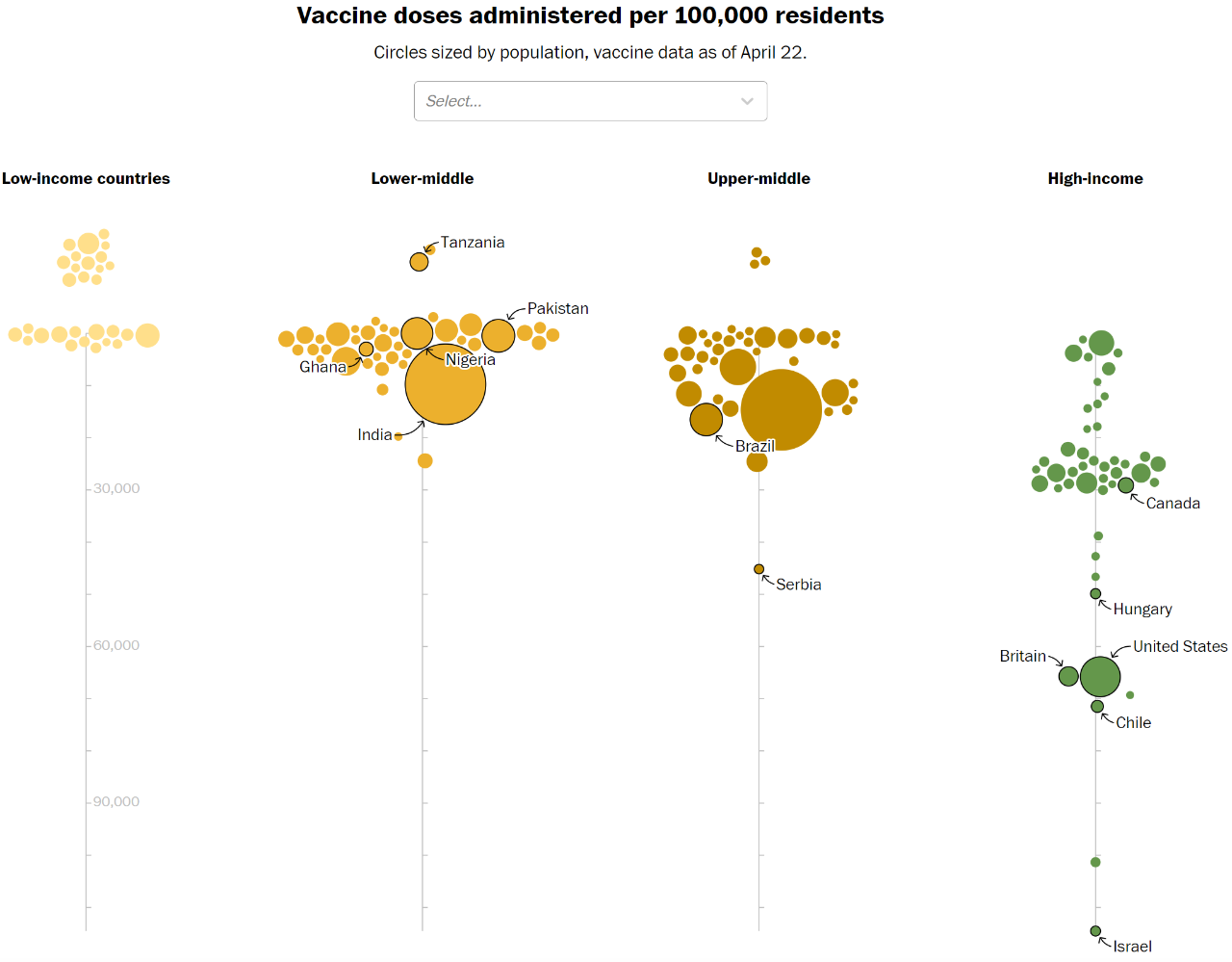 The Washington Post summarized how the vaccines are distributed in the world. It shows the vaccines doses administered per 100.000 residents.