There's a pot of salt next to the door of our apartment. Apparently for good luck. But it helps to keep the bad spirits away, as well. Aswangs among others...

I hadn't heard about The Aswang Project before. Well, I'm not really into mythology, so no surprise here. But an open letter attracted my attention. The Aswang Project got struck in an online controversy on race, culture and identity.

I'm not going to focus on that controversy. Too much words have already been wasted on the topic. But through this discussion it, I discovered an unknown world to me: folklore and mythologies in the Philippines.

Jordan Clark, a Canadian guy, shares since 2006 his knowledge on myths, creatures and shamans in the Philippines. He produced a documentary, directed a web series and edited a dictionary of Philippine Mythology (originally written by Ferdinand Blumentritt, a correspondent of the Filipino national hero José Rizal).

I watched the full documentary last Sunday. Very interesting, and very respectful towards Filipino superstitious beliefs and practices. Clark tries to understand where the aswang comes from. Wikipedia explains:

An aswang is umbrella term for various shape-shifting evil creatures in Filipino folklore, such as vampires, ghouls, witches, viscera suckers, and werebeasts (usually dogs, cats, pigs). The Aswang is the subject of a wide variety of myths, stories, arts, and films, as it is well-known throughout the Philippines.

If you'd like to know which role aswangs played – and still play – in the Filipino history, culture and folklore; and where its roots are situated, the documentary is a must see.

The docu will also explain you why we have salt in our apartment ;)

The documentary is probably also a good backgrounder to the Netflix series Trese. It's different, but from the trailer we can deduct that some creatures, like aswang or manananggal, formed the inspiration of the anime-series, and the Filipino horror comic series with the same name.

Marikina River Park is an unexpected green space in Metro Manila. It's a vast system of parks, trails and open spaces along the Marikina River. It was developed in the nineties and relived the river banks after decades of negligence and pollution.

The recreation facilities stretch over 11 kilometer. The park covers an area of 220 hectares. It contains the Riverbanks Center, a mall and office complex. Throughout the park, different kind of facilities are scattered. Among others an amphitheater for 20.000 people, floating stages for cultural events, a Roman dome, a Chinese Pagoda, a gazebo and picnic grounds. The sports facilities include a baseball field, a basketball court and a skating rink. 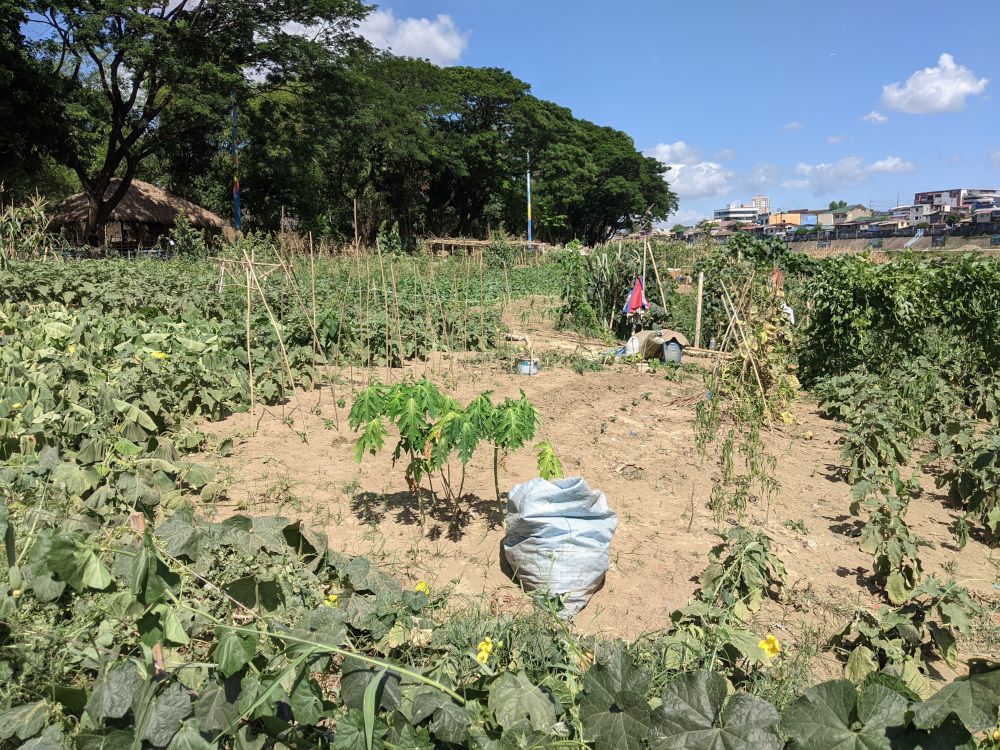 On the riverbanks urban farmers plant vegetables and hold animals in the so called salamyaans. Elderly come together and spend time together.

The park and river banks are bringing people together and are strengthening the community. That was also one of the objectives of the 'Save The Marikina River' (.pdf) program, the initiative that shaped the river park in the nineties. The rehabilitation program was launched in 1993 and had different aims: reduce flooding, improve the eroded riverbanks, resettling informal settlers and create an environment for community building, leisure and sports.

By the 1970's the Marikina River was heavenly polluted with domestic sewage and industrial waste. The river was practicaly dead. On the river banks 2.000 informal settler families built their house in an area that was often flooded. The quarrying of the river and its banks resulted in erosion. All this lead to more flooding, to poor water quality and hygiene problems. Moreover Marikina lies in an earthquake prone area.

From 1992 on the government took a series of resolutions and actions to rehabilitate the river and prepare the city for the frequent flooding and earthquakes. The informal settlements were removed through a relocation program. The decade long initiative was a success. The Asian Disaster Preparedness Center summarizes the program in a leaflet titled 'Flood Disaster Mitigation and River Rehabilitation by Marikina City, Philippines' (.pdf) It received also the Galing Pook Award (.pdf). 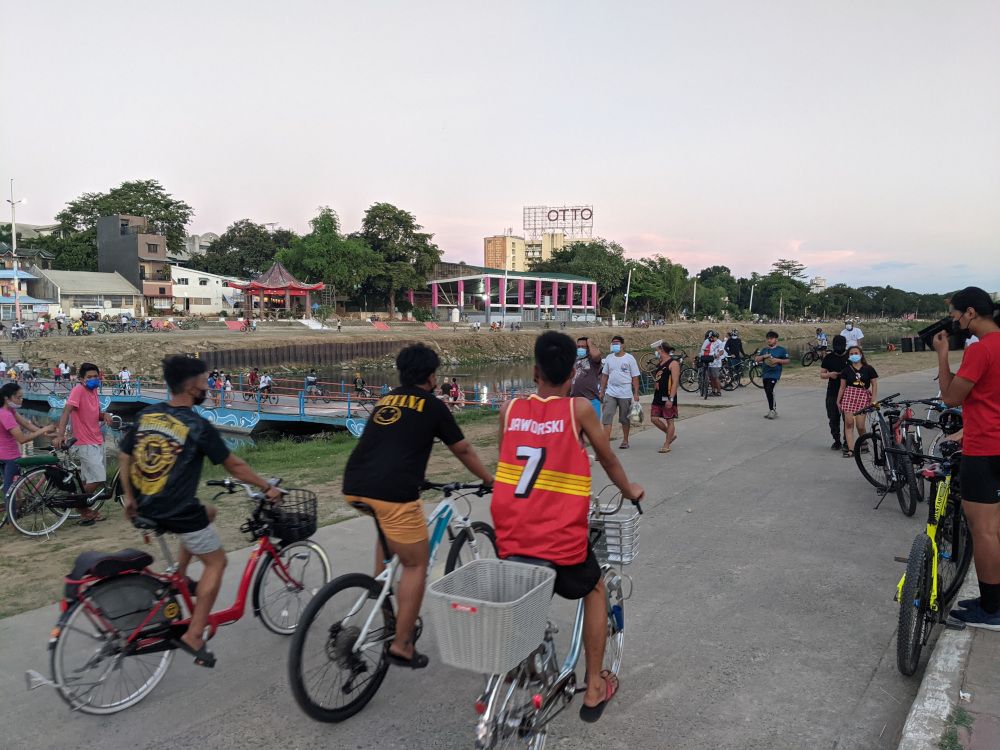 A lot of initiatives are taken. Often with the best intentions. But that doesn't guarantee success. Marikina made sure that inhabitants and – important – the informal settlers were convinced of the project. Mayor Bayani F. Fernando (.pdf):

“The people have to touch and smell the water. It is hoped that this experience and exposure will galvanize them to muster enough political pressure for the government and the rest to act and conserve the river.”

Today, the park is the center for community activities and sports. Thousands enjoy walking, biking and jogging. The restoration created job opportunities, relived the spirit of Marikina and empowered the community. Marikina River is not healthy yet, but awareness has been created. Hopefully neighboring cities will start seeing that enhancing a river can lift a whole city. 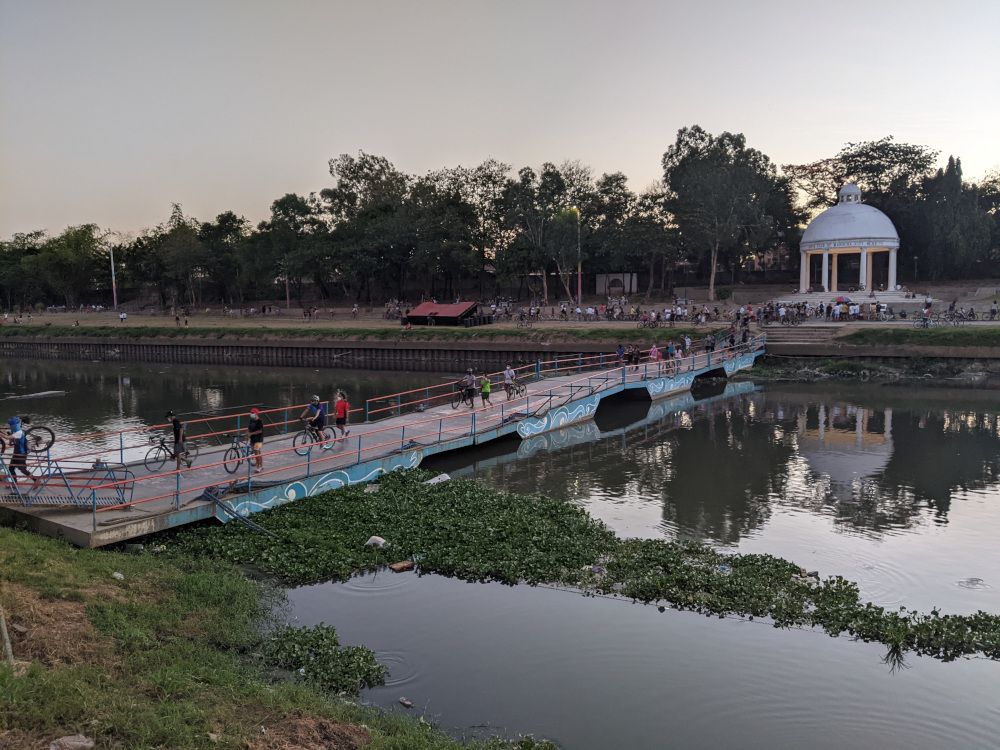 'Stop acting like colonizer'. The headline this morning in the newspaper was bold. It was a message intended for China from some Filipino business groups. The business men even dug up a quote of Deng Xiaoping from 1974 warning his country not to act like an aggressive superpower or bully.

The soundbite is the culmination in an ongoing discussion about the claims of China and the Philippines on some islands and reefs in the South China Sea. It's a quarrel that exists since the nineties, and earlier. But the past months a new chapter was written.

It started with pictures taken by the Filipino army of some two hundred Chinese vessels in the Julian Felipe Reef, part of the Filipino economic exclusive zone and its continental shelf. International maritime law says that the Philippines enjoys in that zone the exclusive right to exploit or conserve any resources, living and non-living.

The pictures were dated March 7, 2021, but were published March 20. China said the flotilla was looking for some refuge in the Union Banks from the bad weather. But some of the ships are, one month later, still in the vicinity of the reef.

The dispute is a minefield. The Chinese vessels are fishing in the reefs and harvesting huge clams. But, some say, the Chinese are emptying the sea, chasing small Filipino fishing crews away and occupying the reefs. Others, among them the Philippine government, don't want to go against China because of all kinds of other interests. They hope it will pass.

What is happening in the South China Sea appeals to the imagination. China is building all kind of installations on the islands and reefs, and are presenting the nations from South East Asia with a fait accompli.

The Filipino newscaster ABS-CBN, for instance, checked what is happening in the waters around the Union Banks. The videos and photos are intriguing. Airports, radars and buildings with different floors have been build. There are even wind turbines! And the huge 'fishing' ships are being escorted by military ships and the Chinese coast guard.

The Filipino may claim the territory, but it is clear from the videos that China owns the islands and reefs. 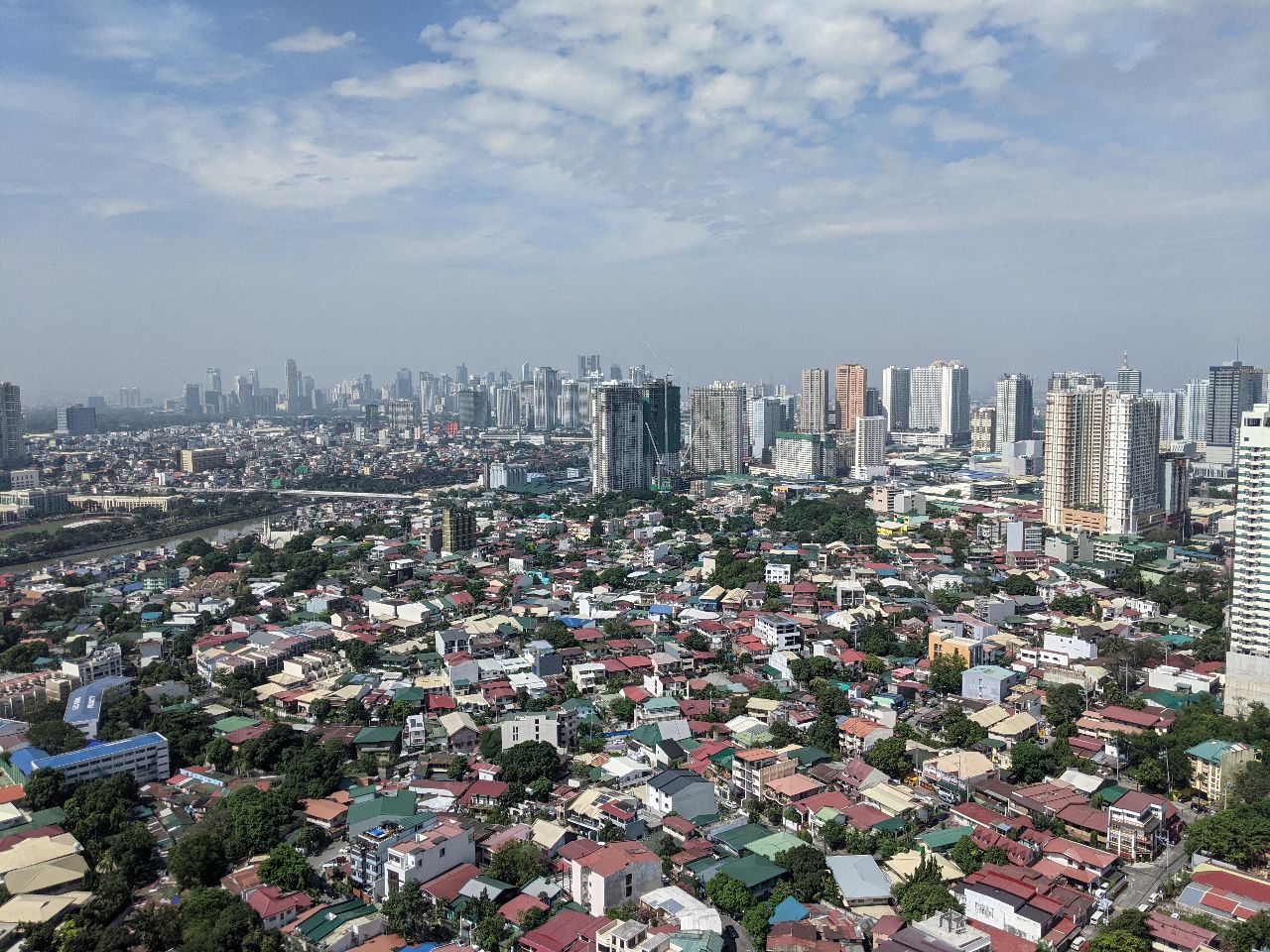